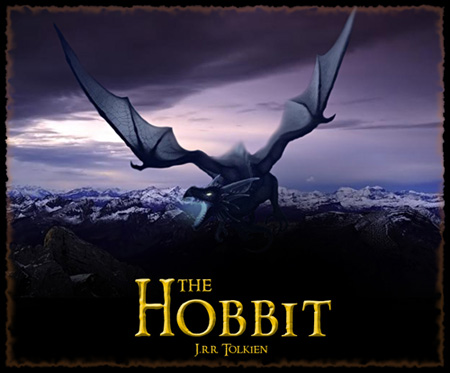 The Hobbit movies finally got some good news today when it was announced the project had received the green light from the studios and it was confirmed Peter Jackson would be in the directors chair as well as the producer and co-writer seats.

"Exploring Tolkien’s Middle-earth goes way beyond a normal film-making experience," said Jackson. "It’s an all-immersive journey into a very special place of imagination, beauty and drama. We’re looking forward to re-entering this wondrous world with Gandalf and Bilbo—and our friends at New Line Cinema, Warner Brothers and MGM. Warner Bros, New Line Cinema and MGM also announced shooting on The Hobbit would begin in February 2011 and would be shot in 3D.

Gandalf tricks Bilbo into hosting a party for Thorin and his band of twelve dwarves, who sing of reclaiming the Lonely Mountain and its vast treasure from the dragon Smaug. When the music ends, Gandalf unveils a map showing a secret door into the Mountain and proposes that the dumbfounded Bilbo serve as the expedition's "burglar". The dwarves ridicule the idea, but Bilbo, indignant, joins despite himself.

The group travel into the wild, where Gandalf saves the company from trolls and leads them to Rivendell, where Elrond reveals more secrets from the map. Passing over the Misty Mountains, they are caught by goblins and driven deep underground. Although Gandalf rescues them, Bilbo gets separated from the others as they flee the goblins. Lost in the goblin tunnels, he stumbles across a mysterious ring and then encounters Gollum, who engages him in a game of riddles with deadly stakes. With the help of the ring, which confers invisibility, Bilbo escapes and rejoins the dwarves, raising his reputation with them. The goblins and Wargs give chase but the company are saved by eagles before resting in the house of Beorn.

The company enter the black forest of Mirkwood without Gandalf. In Mirkwood, Bilbo first saves the dwarves from giant spiders and then from the dungeons of the Wood-elves. Nearing the Lonely Mountain, the travellers are welcomed by the human inhabitants of Lake-town, who hope the dwarves will fulfil prophecies of Smaug's demise. The expedition travel to the Mountain and find the secret door; Bilbo scouts the dragon's lair, stealing a great cup and learning of a weakness in Smaug's armour. The enraged dragon, deducing that Lake-town has aided the intruder, sets out to destroy the town. A noble thrush who overheard Bilbo's report of Smaug's vulnerability reports it to Bard, who slays the Dragon.

When the dwarves take possession of the mountain, Bilbo finds the Arkenstone, an heirloom of Thorin's dynasty, and steals it. The Wood-elves and Lake-men besiege the Mountain and request compensation for their aid, reparations for Lake-town's destruction, and settlement of old claims on the treasure. Thorin refuses and, having summoned his kin from the mountains of the North, reinforces his position. Bilbo tries to ransom the Arkenstone to head off a war, but Thorin is intransigent. He banishes Bilbo, and battle seems inevitable.

Gandalf reappears to warn all of an approaching army of goblins and Wargs. The dwarves, men, and elves band together, but only with the timely arrival of the eagles and Beorn do they win the climactic Battle of Five Armies. Thorin is fatally wounded and reconciles with Bilbo before he dies. Bilbo accepts only a small portion of his share of the treasure, having no want or need for more, but still returns home a very wealthy hobbit. 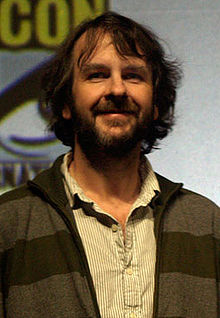 The Hobbit is the working title for a planned two-part film yet to be produced. The film is intended to be based on the novel of the same name by J.R.R. Tolkien. The film is in development and Peter Jackson, director of The Lord of the Rings film trilogy, will serve as producer, co-writer, and director. Guillermo del Toro worked with Jackson for over two years on the pre-production of the film, with a view to directing, but left the project in May 2010, and the following July it was reported that Jackson had signed on to direct both films. Ian McKellen, Andy Serkis, and Hugo Weaving, who played characters in The Lord of the Rings film trilogy that also appear in The Hobbit, though currently unsigned, are expected to reprise their roles of Gandalf, Gollum, and Elrond respectively. Additionally, composer Howard Shore, who collaborated on the score for The Lord of the Rings film trilogy, is expected to compose the score to The Hobbit films.

Originally, the first film would have been an adaptation of the novel The Hobbit and the second part would have bridged the gap between The Hobbit and The Lord of the Rings. It was Del Toro's intention to instead split and expand the narrative of The Hobbit into two parts.[8] The two films will be shot back to back, beginning in February 2011.

Plans were made for the films to be shot in New Zealand, where the Lord of the Rings trilogy had been filmed. However, during a dispute between actors' unions and the film producers, the unions announced a boycott and the producers considered shifting the filming to another country. After negotiations with Warner Bros. executives, the New Zealand government announced that it would expand subsidies and introduce new legislation to address the studio's concerns, and that filming would go ahead in New Zealand.

Del Toro and Jackson had a positive working relationship, where they compromised on disagreements to the benefit of the film. Del Toro believed he would be able to shoot all of the films himself, although Jackson noted he had similar hopes for filming all of his trilogy, and offered to help as second unit director. Del Toro planned on shooting the films in the trilogy's 2.35:1 aspect ratio, rather than his signature 1.85:1 ratio. He hoped to collaborate again with cinematographer Guillermo Navarro. Del Toro shares Jackson's passion for scale models and background paintings, though he wanted to increase the use of animatronics: "We really want to take the state-of-the-art animatronics and take a leap ten years into the future with the technology we will develop for the creatures in the movie. We have every intention to do for animatronics and special effects what the other films did for virtual reality." Spectral Motion (Hellboy, Fantastic Four) are among those Del Toro wants to work with again. Some characters will be created by mixing computer-generated imagery with animatronics, and some will solely be created with animatronics or animation. Gollum will be entirely digital again, as Del Toro noted "if it ain't broke, why fix it?"

Del Toro has said that he interprets The Hobbit as being set in a "world that is slightly more golden at the beginning, a very innocent environment" and the film would need to "take you from a time of more purity to a darker reality throughout the film, but in the spirit of the book".He perceives the main themes as loss of innocence, which he likened to the experience of England after World War I, and greed, which he says Smaug and Thorin Oakenshield represent. Bilbo Baggins reaffirms his personal morality during the story's third act as he encounters Smaug and the Dwarves' greed. He added "The humble, sort of a sturdy moral fibre that Bilbo has very much represents the idea that Tolkien had about the little English man, the average English man", and the relationship between Bilbo and Thorin would be the heart of the films. The Elves will also be less solemn.

In 2010, Del Toro left the project, due to delays. On May 28, he explained at a press conference that due to Metro-Goldwyn-Mayer's financial troubles, the Hobbit project had then not been officially greenlit at the time. "There cannot be any start dates until the MGM situation gets resolved... We have designed all the creatures. We've designed the sets and the wardrobe. We have done animatics and planned very lengthy action sequences. We have scary sequences and funny sequences and we are very, very prepared for when it's finally triggered, but we don't know anything until MGM is solved."Two days later, Del Toro announced at TheOneRing.net that "in light of ongoing delays in the setting of a start date for filming", he would "take leave from helming", further stating that "the mounting pressures of conflicting schedules have overwhelmed the time slot originally allocated for the project. ... I remain an ally to it and its makers, present and future, and fully support a smooth transition to a new director".Reports began to surface around the internet about possible directors; apparently the studios wanted Jackson, but such names as Neill Blomkamp, David Yates, Brett Ratner, and David Dobkin were mentioned.

On June 25, 2010, Jackson was reported to be in negotiations to direct the two-part film. On October 16, 2010, New Line Cinema and Warner Bros. confirmed that The Hobbit was to proceed filming with Jackson as director and that the film will be in 3-D. As well as confirming Jackson as director, the film was reported to be greenlit, with principal photography to begin in February 2011. Jackson stated that "Exploring Tolkien's Middle-earth goes way beyond a normal film-making experience. It's an all-immersive journey into a very special place of imagination, beauty and drama."

Ian McKellen and Andy Serkis (who played Gandalf and Gollum, respectively), met Del Toro, who ideally wanted every actor (including Ian Holm, who played Bilbo in The Lord of the Rings) to reprise their roles, although he acknowledged some may be unable to because of health problems; he would also consider having Holm narrate the films. In an interview with BBC radio, Del Toro confirmed that McKellen, Serkis and Hugo Weaving (who played Elrond) will reprise their roles. All 13 Dwarves and Beorn will appear, while Thorin's father, Thráin II, will also be featured. Doug Jones—who portrayed various creatures in Hellboy, its sequel and Pan's Labyrinth—was interested in playing Thranduil, King of Mirkwood and Legolas' father, but Del Toro said he wanted Jones for a different role. Similarly, Hellboy star Ron Perlman was a person whom Del Toro had "something in mind for".

Former Doctor Who star Sylvester McCoy, who appeared alongside Ian McKellen in a Royal Shakespeare Company production of King Lear in 2008, has confirmed he is in negotiations to play a major role as a "wizard", leading to speculation he could appear as Radagast the Brown. This was later confirmed by the actor.

The same Deadline report also suggested James Nesbitt, David Tennant, and Michael Fassbender were in negotiations for parts in the film project.

In October 2010, Jackson confirmed that Martin Freeman would play Bilbo and Richard Armitage would play Thorin. Other dwarves would be played by Irish actor Aidan Turner (Kíli), English actor Rob Kazinsky (Fíli), Scottish actor Graham McTavish (Dwalin) and New Zealand actors Stephen Hunter (Bombur), Peter Hambleton (Glóin), John Callen (Óin) and Mark Hadlow (Dori). Peter Jackson announced "Despite the various rumors and speculation surrounding this role, there has only ever been one Bilbo Baggins for us. There are a few times in your career when you come across an actor who you know was born to play a role, but that was the case as soon as I met Martin Freeman. He is intelligent, funny, surprising and brave—exactly like Bilbo and I feel incredibly proud to be able to announce that he is our Hobbit."On November 1, 2010, Jackson confirmed that James Nesbitt (Bofur) and Adam Brown (Ori) had also been added to the cast.

Data here has been compiled from various sites. No copyright infringement intended.